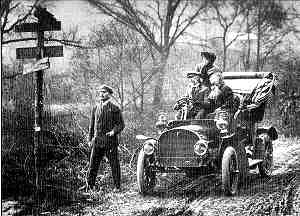 The famous Rambler "One-Armed Operator" magazine ad from  1905, which also kindly points out the suitability of this huge vehicle for children.

Probably the kids would drive it to school to avoid the twenty-mile uphill walk both ways in the snow...

1905 Rambler Surrey Type One magazine ad This ad has to be  one of the all-time beauties from General  Sales Manager and marketing guru Ned Jordan, later of This is a poster for the 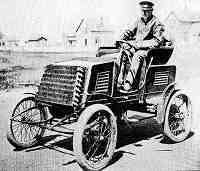 Charles T. Jeffery, the founder's son, behind the wheel of the 1901 Rambler Model A, which he built.
The Model A undergoing testing in 1901. Fred Duesenberg is at the wheel. 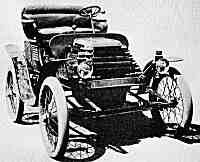 1902 Rambler Model D.This is the car that put Rambler on the map, the second mass-produced car in the United States, selling over 1500 in its first year. A view of the 1905 New York Auto Show.  If you look carefully at the center of the picture, you can see the Rambler booth just above the AutoCar sign in the picture.

(From "Route 66 Rambler Report")
This is kind of long, so as soon as I can I'll break it down into a few shorter pages...

When last we  left our hero, inventor Thomas Buckland Jeffery had brought the Rambler name to the pinnacle of the bicycle trade. After his close friend and business partner R. Phillip Gormully had passed away, Tommie B. sold out his stake in the bicycle business, only to start all over again with a new passion, at the tender young age of 54.

As we adjust the AMC "Time Command" (a most useful piece of optional equipment) to A.D. 1903, we find that he had established a new line of motorcars in 1900.  This new product  he also called Rambler, recognizing the need for brand stability.  The Rambler bicycle had built a reputation for its build, value, and features.

Jeffery continued those same qualities in the new Ramblers.  The brand was known as "The Car of Steady Service". In 1903, he sold 1350 cars, and was soon expanding his factory to meet production.  The design of the cars continued unchanged, with the Rambler Model C, and D Runabout. The chief difference between the two models was that the Model D was a "stanhope" design, meaning it had a retractable canopy and side curtains. The horsepower of the cars was improved, up from 4 hp to 6 hp.

New test drivers were hired, among them a couple of young brothers by the name of Fred and Augie Duesenburg.

Thomas B. Jeffery & Co. introduced the "dismountable" wheel in 1903, making the Rambler the first car to be offered with a spare tire(as an option, of course).

From the newspaper article "Devil Wagon Days" by Dorothy V. Walters, for the Milwaukee Journal:
"...For women to drive was quite unusual, but in the summer of 1903 Mrs. George Rowe and Mrs. Nettie Hoyt drove from Beaver Dam to Milwaukee in a three-day trip. This feat received much publicity in Milwaukee papers of that day. The machine which they used is now in the possession of the Dodge County Historical Society. It was a Rambler purchased from the Thomas B. Jeffery Company(actually Thomas B. Jeffery & CO.---mike) of Kenosha. Like all but the de luxe early models, it had neither horn nor headlights, and like its contemporaries, it needed frequent repairs...".
The newspaper article above was written in 1946.  That same Rambler is still at the Dodge County Historical Society...


Also in 1903, Roy D. Chapin sold his stake in the Automobile Equipment Company, which produced waterproof canopies and chain guards, among other things. That same year, while still working as a tester for Oldsmobile, he joined in a venture known as the E. R. Thomas Motor Car Company, which  began operation at the other end of the  Great Lakes from Kenosha in Buffalo, New York.

Henry Ford organized the Ford Motor Company in Detroit in 1903, the year after The Henry Ford Company went under.  That year Ford became third in the U.S to reach mass production, behind Olds and Rambler.  The Dodge Brothers canceled their engine-building contract with Oldsmobile to produce engines for Ford Motor in exchange for a 10 percent stake in Ford.
The Mitchell-Lewis Motor Company also began making cars in 1903.   The Mitchell & Lewis Company had been producing carriages in Racine, Wisconsin since the 1850's, and motorcycles since 1901.

Another start-up in 1903 was Overland Car Company, in Terre Haute, Indiana, as a division of the Standard Wheel Company. One of their largest dealerships was that of John North Willys, in Elmira, New York.  All of these names would become closely tied to that of Rambler in the course of time.

Of much larger interest to the automobile industry as a whole, however was the decision of Henry Ford and Thomas B. Jeffery, among others,  to dispute the Selden Patent, a blanket patent of an entire automobile.  This required all auto makers in the U.S. to pay license royalties to the holder of the patent in order to produce automobiles.  The holder of the patent was none other than  our old friend, Colonel Albert Augustus Pope.  In order to hold a license, a manufacturer had to make application to the Association of Licensed Automobile Manufacturers.  The members of the association approved an application only with a unanimous vote.  This gave them control over who would be their competition, and essentially formed a trust.

This organization had come about when Pope's Electric Vehicles Corporation had obtained the rights to the patent from George Selden, a patent lawyer with a good scam, who had never built a car.  Pope promptly sued his main competition, the Winton Motor Company, as Winton had decided to abandon electrics and go with gasoline.  Winton lost the decision, and didn't have money enough to appeal,, as several manufacturers had joined with Pope to provide legal money.  Winton and these other makers, among them Olds, Cadillac, Locomobile, and Autocar, formed the ALAM.

The inventor and successful patent warrior Thomas B. Jeffery was of the opinion that the patent wasn't "worth the paper it was printed on," in his words.  Many in the industry, including Henry Ford, encouraged him to fight the patent, as he was the most successful patent litigator to that date, winning every U.S. Patent dispute he had engaged in.  But with his boyhood friend R. Phillip Gormully now dead, he didn't really have the stomach for it.  Gormully had been the "front-end man" to Jeffery's role as engineer, and it had been he who had guided the successful challenge to the Lallement Bicycle blanket patent in 1886.

Thomas B. Jeffery & Co.  never made application to the ALAM, and never paid any royalties.  Yet no suit was filed, probably for two reasons:
1)  Pope had already come out on the wrong end of a blanket-patent war with Jeffery in the Lallement matter, and consideration was probably paid to the fact that Jeffery had never lost, regardless of which side he was on.  He had successfully prosecuted his own patents for the clincher tire, and tire makers were already beholden to Jeffery for fees on that patent.  Cars without tires are not very saleable.
2)  Thomas B. Jeffery & Co. , and TBJ himself, each held vast financial resources, and could make a court fight a very expensive proposition.

In 1903, Henry Ford made application to the ALAM, whose stated public goals were to protect the public from "unsafe and shoddy design, and fly by nights incapable of honest business".  Ford's application was denied, probably because most of the members were from Detroit, and felt that Detroit had enough competition.  The main reason given for the denial was that Ford had already had two business failures(Detroit Motor Co. and the Henry Ford Co.), and that his cars were only "assembled", not truly manufactured.  In fact, these things were true of the majority of the existing members of the ALAM.

Ford felt that the ALAM had insulted his design and engineering skills, and was outraged.  He issued a statement refusing to pay royalties and stating that the patent was worthless.  A suit was filed against Ford Motor Co. by the ALAM, and additionally they took out ads attacking Ford, and threatening prosecution against anyone who bought his products.  Ford responded with ads ofhis own promising 12 million dollars legal protection to his customers.

During  the 7-year course of the suit, which progressed through decisions against Ford and multiple appeals,  Thomas B. Jeffery & Co. contributed expansive amounts to Ford's legal defense.  TBJ knew what the final outcome would be.

In the course of one hearing, an automobile race began forming in the street outside the courthouse.  Ford's lawyer, on looking out the window, told the judge, "Your Honor, I see a few Duryeas out there, and many Fords, but not one single Selden!".  This, of course, pointed up the fact that Selden was a lawyer, not an engineer.

The judge ordered in 1904 that an automobile be built by the ALAM to the specifications of the Selden Patent.  In due course, it was self-evident that the car was not viable from an engineering and operating standpoint.  The final ruling in 1911 was that while the Selden Patent was valid, the type of engine and its mounting design meant that Ford had not infringed upon the patent.

No one paid license fees after that, and the ALAM faded away.  Once again the Father of the Rambler had been proven right.  Although he did not fight the patent overtly, he had contributed a substantial amount over the years to help fund the fight.  Now a second industry owed its prosperity at least in part to the Rambler name.

Additional developments in 1904 included an explosion at the Standard Wheel Company, and they removed their backing from the Overland venture.  Claude Cox, the founder, was able to buy Overland outright for $8,000.

Rambler introduced two new cars, the Model K and the Model L.  In addition, there was a delivery wagon based on the Model K.

A 1904 Rambler Model D made a trip from Laramie, Wyoming to New York City, bringing total mileage on the vehicle to 26,000 miles.

Frank Leslies' Popular monthly featured a special on "The Automobiles of 1904".

Drat!  All this peering about at the past has once more exhausted the power source for the Time Command unit.  We must again take our leave of history and return to the present,  as it becomes necessary to rejuvenate the battery.
mike