1920 La Fayette ad.  La Fayette was a separate, high-end venture begun in 1920, of which Charles W. Nash was a main pairtner.

I've put some things on the E. R. Thomas-Detroit page, a few pictures and links.

On this page I'm featuring an ad for Rambler from 1905 boasting of the ability of  one-armed customers to operate their Ramblers.  This is only to be expected, as it is also the perfect car for children.
The Marlin/Tarpon development photos which were obtained in November 2006 have been moved to the "American Motors Corporation" page for 1954-1987, located in the TimeLine.
November 23, 2006:


We went to two different concerts in the last month.  ...Molly Blue  was a huge hit with the crowd AND the parking crew at both shows....not to mention the car show that we happened upon and pulled in to.  Around a dozen people left the show area to go out to the parking lot and have a look at the curious little Gremlin out there.

Acquired treasures of late include two new 1960 sales brochures, and a collection of 12 Nash ads from 1933 through 1954.  As soon as I tame the raging TimeLine, these goodies will be added to the Open Library Project.

Kenosha West, the parts page, has been added to the mix, complete with links and classified ads for cars, parts, and literature.  This will be expanded over time.
October 11, 2006

I re-worked the
Home page a little bt.  I wanted the
TimeLine and Library to be accessible at all times.  I am now trying to fill the TimeLine data skeleton out a bit, and have added a Make, Model, Year skeleton that also waits to be filled.

A 1934 advertisement for the Ambassador announcing a miilion cars had been built by Nash. 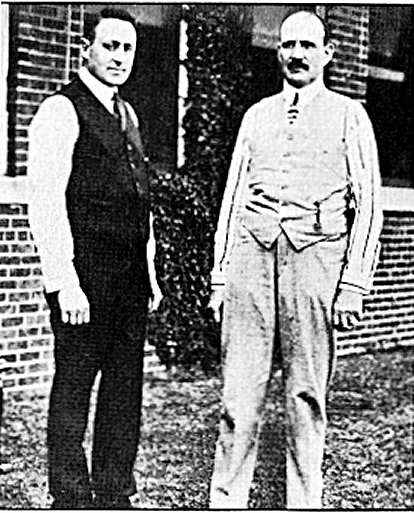 In 1916 Charles Warren Nash (on right) left the presidency of General Motors to produce his own line of automobiles. He purchased The Thomas B. Jeffery Company from the stockholders, led by Charles Thomas Jeffery, shown here on the left.

Even now the Rambler is most remembered in connection with the Nash name, not Jeffery or AMC.

This is the display that Nash showed in the 1933/34 World's Fair in Chicago.
This building was 8 stories tall and made of plate glass.

A conveyor moved cars up and down the glass tower and into the showroom at the bottom floor.