May
Nashin' and Thrashin'... 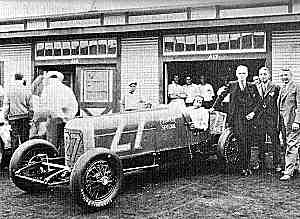 1931 saw Hudson placing 10th in the Classic with this Marr Special Straight 8, driven by the immortal Chet Miller 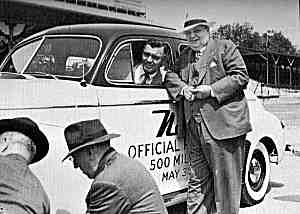 In 1947, Nash-Kelvinator Corporation provided this Ambassador as the Pace Car, driven by none other than N-K President George W. Mason 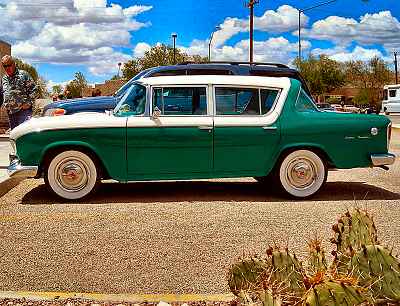 Annual Route 66 Fun Run presented by the Route 66 Association of Arizona
Friday May 4, Saturday May 5, Sunday May 6 2007 Seligman, Arizona to Topock, Arizona

I just put together a web page to show some pictures of this event...

May 23, 2007:
This page will remain open for now,  Due to the responses I have received concerning traffic at this site from family, friends, and visitors to the site.

I am probably going to shut down this site in its present form.  One or two people a day is just a waste of my time.  I educate more people than that about AMC every day, just by driving my Gremlin in traffic.

If you want this site to stay up, let me know.  Better yet, let someone else know, and get people coming here.  Don't let that hit counter fool you. They are famous for lying.  I am pretty sure only about 20 people have ever even seen this page, like over and over.


Well, it took a week, but I created a web page to show some pictures of the Annual Route 66 Fun Run.

There were hundreds of cars of every kind there...

Surprisingly, Molly Blue was one of the most popular cars at this rally, with some folks actually running out into the street to offer their bodies as a sacrifice, just to be near to her.

Rambler Milestones for May

May in the AMC World:
A Memorial Day tradition is the running of the Indianapolis 500 Memorial Day Classic.  American Motors and its ancestors have played their part there, too... 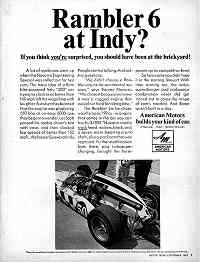 In 1967, Barney Navarro's team attempted to qualify a turbocharged 199 CID American Motors six-cylinder at Indy, driven by Dave Strickland.  These efforts went on for a couple of years, but met with little success.  There are limits to what you can do with a cast-iron passenger car motor...

I got this picture from The Javelin Home Pages, by John Rosa, at:

http://www.JavelinAMX.com
I can only wish that my site was as nice as his... a must see for every AMC freak. 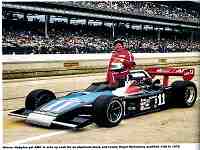 In 1978, Roger McCluskey qualified 11th in the Warner-Hodgden AMC Experimental Special.  This car featured an aluminum block and heads, but inferior castings killed hopes for that year... 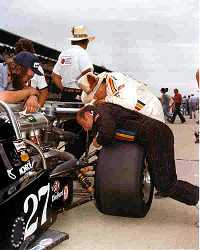 Jimmy Thrall, Dick Simon, and John Martin working on the Vollstedt/AMC fielded at Indy in 1979.

On May 1, 1915, Charles T. Jeffery, son of Rambler originator Thomas B. Jeffery, and heir to the line, set sail From New York City for Europe on a fact-finding tour.

However, there was a slight hitch in his plans a week later, when on May 7, the ship on which he was sailing, the R.M.S. Lusitania, was torpedoed and sunk by a German U-boat, precipitating America's entry into World War I.  Charles Jeffery himself, managed to survive the devastation.
This defining event changed Charles' life forever, and directly resulted in his decision to lead the stockholders to sell out to Charles W. Nash, former president of General Motors, and giving birth to the Nash Motor Company...