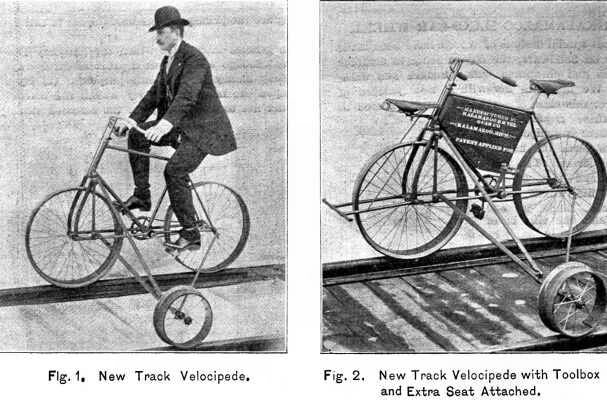 Here's a quarter-page ad from 1888 for the American Cycles, along with some other ads on the same page...

An 1820 map of Plymouth, Devon Shire, England.  It would still have looked much the same in 1845 when Thomas B. Jeffery was born here, in a neighborhood known as Stoke Damerel.

<--- In the article on the left is an advertisement from 1881 for Gormully & Jeffery Mfg. Co. Their bicycle line is called the American Ramblers.

The next year, in 1882, Jeffery was awarded a patent for his "clincher"- type tire design. This drawing also details a needle-bearing headset. Though Jeffery worked as a patent model builder, this drawing carries a note of "no model".

Way back in the beginning...

As far as I can tell, the oldest firm with a direct link to the Rambler line appears to be H. Mitchell Wagons, established 1834.  This company was the predecessor to Mitchell and Lewis Company Ltd.


However, the The dim, distant past of the Rambler line begins with its creator, a man named Thomas Buckland Jeffery.  Thomas B. was born on February 5, 1845 in Plymouth, Devon, England, in an area known as Stoke Damerel.  His father was a postal carrier at the time.  I haven't found much information on his early life, but it is known that at age 18, in 1863, he emigrated from England to America.

The city of Chicago was where he ended up, and he worked there as an optical technician, a lensmaker.  He learned crafting and technical work, and began making models for inventors to submit with patent applications.  This was a requirement of patent applications at the time.

He hooked up with an acquaintance from England in Chicago, whose name was R. Philip Gormully.

During the Great Chicago Fire, his modelmaking shop was destroyed, and he was forced to re-enter the optical trade for a while to save money enough to open his modelmaker's practice again.

He married Kate Elizabeth Wray in 1874, and began to produce baby carriages as well.  During the 1870's he marketed a railroad velocipede, a small one-man foot powered vehicle for the railway. I have so far been unable to locate a picture of his actual vehicle. There are several inventors of these vehicles, and there are several types, but I suspect that it appeared similar to the bicycle-based version.

In 1878, Jeffery went back to England on vacation, and experienced his first bicycle ride, and in 1879 entered the bicycle manufacturing trade.  In 1881, he and R. Philip Gormully formed Gormully and Jeffery Manufacturing. They called their product the American bicycle, beginning with an ordinary(big front wheel) called  the Ideal.  With the advent of the "safety bicycle", essentially the same design as modern bicycles, the new model was called the Rambler.

"A Family in Kenosha"- A magazine article by Beverly Rae Kimes, detailing some  of  the early Rambler history.  Appeared in the 2nd Quarter 1978 issue of
Automobile Quarterly Magazine. Scanned and kindly contributed to my effort by a friend in Alberta.  Contains some beautiful pictures of early Rambler automobiles.