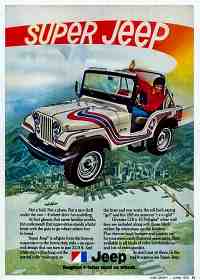 This is a press photo of the new-for 1970 Gremlin


Also in the 1970' s Jeep produced the CJ5/6/7 Jeep Universal, and DJ(delivery/mail) Utility series. Others are the Jeep J-series Pickup, Wagoneer, and introduced the Cherokee.


Other well-known AMC's of the time include the Eagle, Matador, Ambassador, Hornet, Concord, and Spirit.

This is a flyer handed out to introduce the AMX Turbo by AMC.

According to the back of the flyer, the car is equipped with a turbocharged, fuel injected 258 Cubic Inch Inline 6  cylinder OHV, developing 450 horsepower. 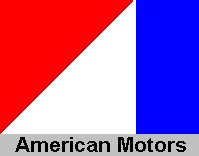 
Their heritage extended from some of the earliest and most innovative of American manufacturers, and as time has shown, probably next to Olds, Ford and a handful of other pioneers, one of the most influential car makers in the proud American industry.The greatest period of that legacy in many minds was the final 33 years of controversy and corporate warfare known as AMC.


In 1987, the glory died, by way of a hostile takeover by Chrysler Corporation.  Some small quantities of the sole remaining AMC, the Eagle 4-wheel-drive station wagon, remained in production during 1988, under the regime of the Chrysler overlords.  Then, this venerable favorite was also terminated without further consideration, leaving the Jeep name alone to carry the torch forward. 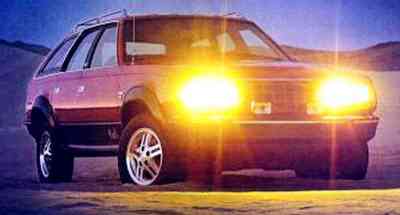 Neither the name of Jeep nor that of the Eagle should be confused with the strangely amateurish badge marketing campaign carried on by the stumbling Chrysler in the name of AMC's final masterpiece.


This ill-advised market strategy, while bringing quick cash and a chance to modernize, contributed directly to the dilution and demise of the third-largest American carmaker, when Chrysler was absorbed by Daimler AG, now known as DCX.

DCX has done as adequately as anyone but toyota in reading the American markets.

Unavoidable comparisons exist with the period of Renault's involvement with American Motors.With Chrysler in this form, the number of large-scale American-based producers of  automobiles has dwindled to two.At this point, constant parallels are being drawn by analysts between the once-mighty General Motors and Ford Motor Company on the one hand, and the course of history as navigated by American Motors Corporation and Chrysler Corporation on the other.  The majority of analysts are pessimistic as to the prospects of survival for large-scale auto production by any American company.


All devotees of the Rambler Heritage,  the throngs of AMC faithful, and millions of fans of the American auto industry should mark these next months with remembrance, and pay tribute to the passing of one of the great corporate icons of the United States. If you are one of the fortunate few who actually own an AMC automobile, now is the time that YOU should be DRIVING IT...
mike